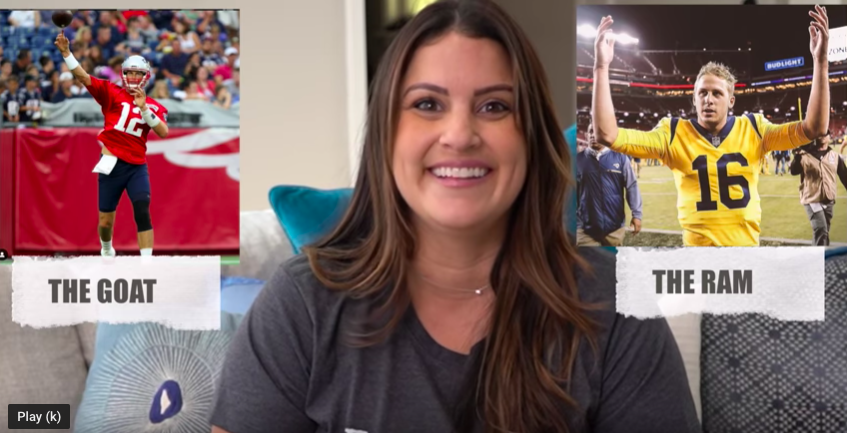 It’s the GOAT vs. the Ram! As part of our kick-off week leading up to the big game on Sunday, February 3, Sisanie is dropping all the knowledge you need to know about the two QBs in the latest episode of Off-Air With Sisanie .

The New England Patriots’ Tom Brady (aka the GOAT -- greatest of all time) is set to face-off against the Los Angeles Rams’ Jared Goff . The two quarterbacks are making history for having the biggest age difference in a Super Bowl game thus far.

Brady is 41 and Jared is only 24, leaving them with a 17-year age difference. Fun fact to drop while watching the big game this weekend: When Tom Brady was drafted by the Patriots, Jared Goff was only 6!

That said, the athletes have more than you think in common: They’re both 6’4” and weigh roughly the same amount. Brady weighs 225 pounds and Goff weighs 221 pounds.

They were also both born and raised in California, in towns only 47 miles apart in Northern California!

Tom is, of course, married and has two kids with Gisele Bündchen and one son from a previous relationship, while Goff is rumored to be dating swimsuit model Christen Harper. ( Click here to relive when Ryan asked Goff's roomie Patrick about the reported romance.)

When it comes to diet, they are very different: Goff has an enzyme deficiency which doesn’t allow his body to break down red meat so he sticks to chicken, turkey and fish, while Brady is known for following a super, superrr strict diet, eating mostly organic and plant-based.

Who are you rooting for this weekend? Sound off on social using the hashtag #OffAirWithSisanie !